This is from an article, found on the Age Online site:
(http://www.theage.com.au/victoria/four-people-mainly-infants-locked-in-cars-every-day-20140303-340p2.html)

I’m guessing that it’s something like an increase from 27°C to 54°C. Quite possible & very dangerous to a child locked in the car. But is it actually “double the outside the temperature”? If this occurred in the USA where temperature is measured in the Fahrenheit scale, it would be from 81°F to 129°F, a 59% increase. Does that mean that it’s  safer to be in the car in Australia? And what if the initial temperature was negative?

The problem lies with the commonly used temperature scales having a zero that is not actually zero and different scales for degrees.

You can read more about the origins & relationships about the temperature scales here.

To truly measure temperature, we need to use the Kelvin scale, based on an absolute zero of around -273°C. This is the point at which gases would have zero volume and particles would have no kinetic energy of motion. An increase of 1K is the same as an increase of 1°C.

Using this scale, there is no debating the relative increase in the car’s temperature…. in fact it’s less than 10%. 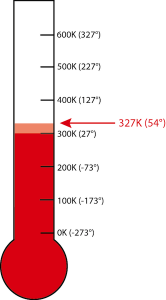 Double the temperature would actually be 600K or 327°C!

This entry was posted in How can thermal effects be explained?, Unit 1, Wrong Physics and tagged Heat, Wrong. Bookmark the permalink.